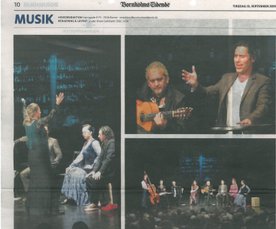 Touring with Eugenio and others 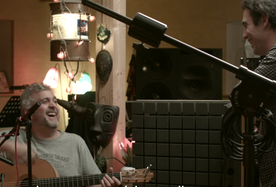 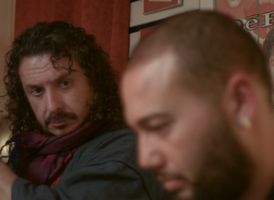 Torrombo and Isidro during the recording 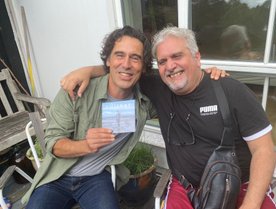 Eugenio get the CD in September 2021 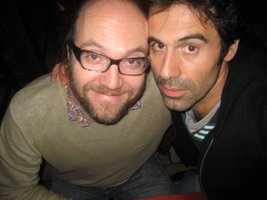 With Ramon in our young days 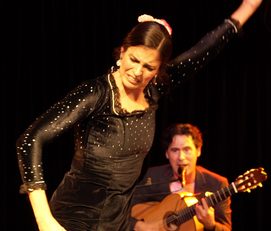 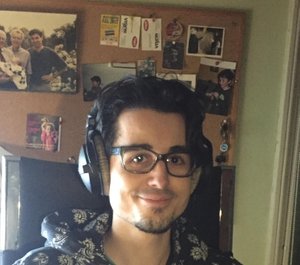 The project started around 2014 where I had some new flamenco songs that I wanted to record. At that time I was touring in Denmark with Eugenio Iglesias, an excellent guitarist from Seville who has accompanied some of my flamenco idols like Chiquetete or La Familia Montoya. When I presented him with some of my composition, he understood them right away. It felt right and easy.  Probably because Eugenio is the kind of talented musician who makes you feel good, just by talking to you. On top of that, despite being such a recognized flamenco guitarist, Eugenio is curious and open-minded. A French guy making flamenco in Denmark would sound suspicious to anyone. Not to Eugenio. On the contrary: he encouraged me to be myself when singing, finding strength in not being a genuine flamenco singer.

In December 2014 I gathered Eugenio, Torrombo (Dancer palmas) and Isidro Suarez ( Percussionist) for five days in a studio with the purpose of recording my songs live. But playing in the same room and keeping takes separated turned out to be very tricky. The first day was a disaster, and at the end of it I was already exhausted and stressed by the situation. My voice didn't work, and I had so much to take care of practically, that I couldn't see how I’d be able to perform. We decided to move around a table, and play softly, me miming the songs and Torrombo and Isidro in bare foot, marking the rhythm on a table or with soft palmas. Almost nothing was rehearsed and it really took time to record every song in one take, without any metronome. We managed to record 8 songs, 2 of them with the bassist Yasser Pino, who passed by one day and adapted brilliantly to the situation.

I came home tired and worried. How did it sound? Could I sing withit? Ramon Maronier, my friend, an excellent guitarist and musician by the way, was the sound engineer and came back to his home in Finland with all the material.

In February 2015 I started to sing on the takes he had chosen, a process that will last until May 2021. I guess I have been singing each song around 1000 times, probably more. First in December 2020 I found out a way that made sense. Beside those 8 eight songs I decided to add 2 that I had failed to record with Eugenio in 2015. This time it was with me accompanying myself as I do in my Duo Flamenco.

Mixing was also difficult. Every single track has the sound of the guitar or of something else. My son Marco who was in charge, decided to make a very personal mix, different for every song. Very unusual for this kind of record, and maybe a bit challenging for the listener.
But after many, many hours of work and a lot of money spent on renting studio, plane ticket, food, gages, trailer, photos and production of the CD , I'm happy to say welcome to my new baby " Gotitas Ínfimas".